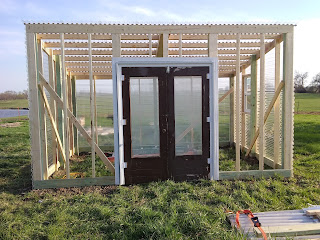 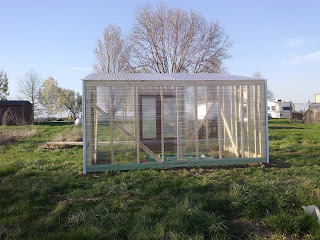 I came home to this. 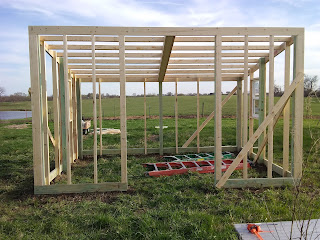 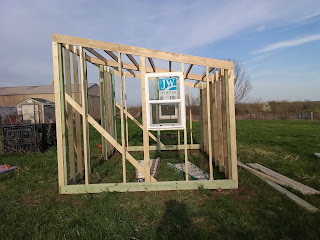 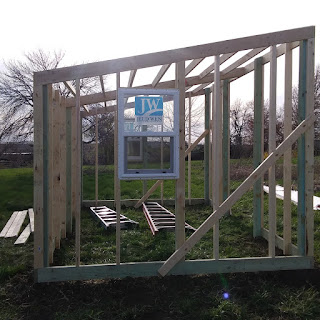 What do you think it is going to be?
Posted by April at 11:59 PM No comments: 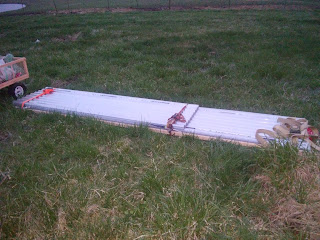 I came home Saturday to find this had been delivered.  Any guesses as to what it might be for???
Posted by April at 11:52 PM No comments:

Spring is here, but next week they say it may snow....again.  I hope that is wrong.

I worked outside most of today.  I am not raking out the gardens yet, as we still have frost as the plants need protection.  Bees and butterflies may still be wintering in the leaf cover as well.  So, until it is consistently warmer, I won't rake them out.

But, things are sprouting, budding and blooming. 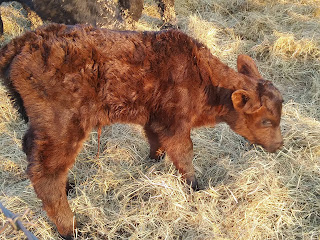 This is our second baby this week.

We are still getting caught up for the tornado of 2016.  We just had our 2 year tornado anniversary.  Of course repairs to the house, barn and fencing came first.

We have several who come out and cut firewood here on shares--from the 40+ trees that came down (most were in the hedge row).  You can start to tell a difference where they are working.

My poultry pen never got a good gate on it.  This week, we put a gate together, and I got it up yesterday.  I still need to line the gate with hardware cloth to keep raccoons from climbing through it.   And, I still need to mount a headboard across the 2 supporting posts.  Then we can finish securing the poultry netting on that side of the pen and put up the support cables.  That was supposed to be done today, but its too windy.  So, saving it for another day.  Here is the before and after of the pen.
Due to all the snow melt, rain and such (much flooding not far from us) it is still a muddy mess.  But, we are making headway.

Never underestimate the power of a determined woman and youtube how to videos.

The brush on my Dyson vacuumed quit spinning.  I could tell the belt was stretched.  My particular model actually has 2 belts.  To change the belts, requires taking the entire vacuum apart and taking the clutch apart.  So, that is what I did.  However, putting the clutch back together was a bit tricky.  At the end of a post that comes out of the clutch, a microscopic c clamp fits.  It holds the entire clutch together.  And, it is spring loaded.  I made this repair in the office.  The first time that spring loaded clutch flew off, it landed on the floor nearby.  The second time, it landed behind the desk, requiring the desk to be moved to retrieve it.  The third time it landed on the printer.  The fourth time, we could not find it anywhere.  Of course Dyson doesn't just sell the little clamp by itself.  I ended up having to buy a new clutch, an after market one off of ebay.  It arrived and it is now back together.  I saved over $250 doing it myself, based on a phone call I made to a Kansas City repair place.  For my model, they stated it would be 287, to replace the clutch (parts, labor and tax).  It would be more than that for me, since I don't live in Kansas City, so I would have also had to add in my time and fuel to go and come back from their shop.

The worse part of the entire ordeal was the going 2 weeks without a vacuum.  Here on the farm, we track in a lot of dirt, hay and mud.

In all seriousness, when you run into issues on this, check out youtube. 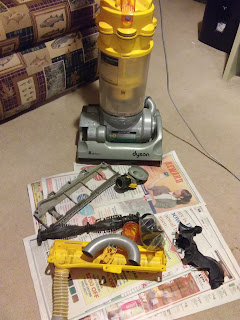 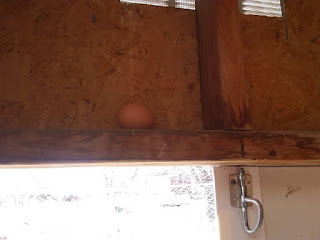 One of my hens laid an egg above the door, on the frame, in the hen house.  That took talent.  I am happy it didn't roll off and come down on my head.

I found it today, while cleaning out the chicken coup.  During the winter I use the deep litter method in the coup to keep the chickens warm.  Now that we have warmer days, I took all the deep litter out (which is pine shavings).

To make it easier to clean, I line all 14 of the nesting boxes and under their roost,  with cardboard before I put shavings in the nest.  Then, when it is time to clean, I just lift up the cardboard and it all goes into the compost.  Makes it much easier than raking it all out and it keeps the wooden floor dry.  I do similar for the duck house, although the ducks rarely use it.  However, a couple of my chickens do lay in it, and the cat hangs out in it a lot.

Very little snow remains on the ground.  In its place, we have mud.  Lots and lots of mud.  We also still have ice, as it drops below freezing at night.  So, areas that were snow melt down during the day, then freeze at night into ice.  Needless to say, its a muddy, muddy  mess.

Awhile back, the chickens split into 2 groups.  Half of them remain hanging out in their own coop (which is a Lowe's shed).  The other half have claimed the ducks house.  I have no idea what caused this split up.   However, they all are laying in the chicken coop.

With the days getting longer, the chickens are again laying, and the ducks have started to lay.  I don't use artificial light, so we get few eggs during the winter.

Since there is a gang of chickens in the ducks house, the ducks have revolted and are now just laying their eggs where ever they happen to be when the urge to lay strikes.   They are fully capable of running the chickens out, but they don't.

So, today when I went out, I found the chicken eggs in the chicken coop in the nesting boxes where they belonged.  And, the duck eggs were scattered all over, in the mud. 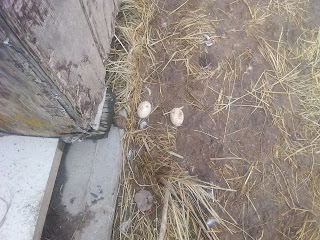 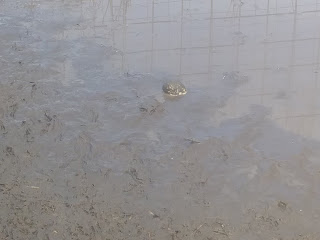 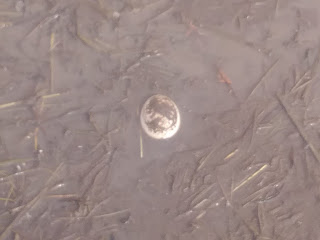 Fed Ex truck was here this morning. But, a bit ago, Fed Ex returned. I could not figure out why. Truck turned around, way down the driveway by the barn and poultry pen. and the driver opened the back door and …...shooed out one my my hens. Evidently she had gotten in the truck this morning. Of course, this would only happen here. Years and years ago, our dog Bo got in the UPS truck and ate the guys lunch...… Only here.

Meanwhile, I still wait for the mail.  Hopefully they will bring me the new clutch for my Dyson vacuum......Hopefully, no critters will get into the mail truck.....
Posted by April at 4:13 PM No comments:

Canadian geese in the far back, snow geese in front, and our ducks in the middle. They are all literally screaming at each other. And, to top off the entertainment, earlier this morning the calves were chasing the geese every time they landed.
Posted by April at 4:07 PM No comments:

I am Done with Winter

I am done with winter.  Finished.  Someone take it away please.  So far, the school district I work at has missed 8 days of school due to the snow.  Making these up with just about run into summer school.  No fun.

The numerous snows have taken their toll on the poultry pen.  The netting has been pulled down twice.  Its back up now, but will need to be tightened back up.  But, since we are into March and it is again snowing, and cold temps predicted for much of this week, it won't be done anytime soon.

The picket fencing we put up around the front flower garden has worked well this winter for stopping the blowing snow that normally piles up in the driveway.  Now, it piles against the fence.  We need to add about 2 more sections before next winter and then there should be no drifting at all left.  It has saved us a lot of shoveling this winter.
Posted by April at 8:48 PM No comments:

A wife of noble character is her husband's crown Proverbs 12:4 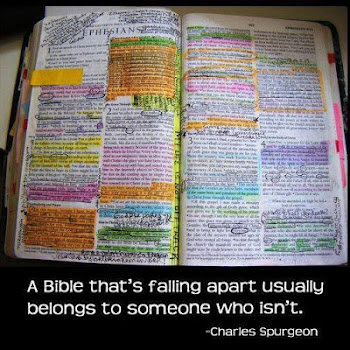 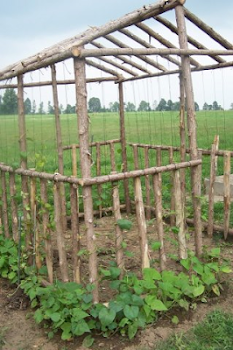 April
I'm a mom, former homeschooled our daughters all who are now grown and left home. We also have several children we watch part time. Our 5 girls include 2 sets of twins. We farm- have cows, horses, ducks, pigs, chickens, rabbits, dogs,cats & fish. We plant a garden & can & freeze our food. We have 2 stocked ponds, an orchard, & vineyard. Each year we try to expand. Our goal to be more of a homesteading family than a farm family. My husband works full time outside of the home, & is a fire fighter, both paid and volunteer; I also work with little ones in a nearby school district I write part time & and sell articles to both print & online publications. I also own a business that teaches CPR, First Aid, babysitting 101, & more. My hobbies include sewing, reading, baking, needle work, gardening, camping & genealogy, volunteer firefighting & EMT.

Please also visit my other site, qualitycprandsafety.blogspot.com for safety and wellness tips, and see when I will be offering American Heart Association CPR and First Aid Classes. 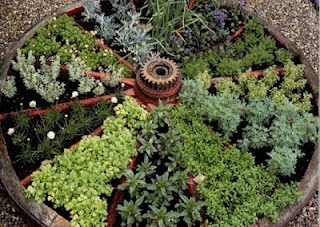 Digital Scrapbooking and a $10 off coupon offer

Genealogy is one of my favorite hobbies. I can spend hours in the library, at cemeteries or on the computer researching and inputting information into my software “Family Tree Maker”. Names in my tree that I am researching include (but are not limited to and of course have various spellings): Espey, also spelled Aspey, Shinabarger, Gray, Hough, Haynes, Lay, Cox, Miller, Lynn, French, Neukommer, Williams, Edgerton, Moore, Baldwin, Hall, Yoder, Rothman, Chadwick, Richards, Brey, Updike, Pierson and more.

A cousin has traced the line back to Austria. I have worked on lines in MO, IN, OR and PA.

If someone needs a grave photo that is located near Clinton Co, Nodaway Co or Johnson Co in Missouri, I can take a digital photo and send it to you for a $20 fee (mainly for my gas). You will get faster response for Clinton Co as that is where I live.

Add equal parts of 20 Mule Team Borax and Arm & Hammer Super Washing Soda (not baking soda!). Stir together until well mixed.
A normal dishwasher will use 2 tablespoons per load

Fill the compartment with vinegar

#1) 3 parts vinegar and 1 part water. Put in a spray bottle and spray down your car windows at night.

#2) Use a bottle of 70% isopropyl alcohol with 3 drops of dish soap. Apply liberally to the glass with a spray bottle at night. In the morning the ice slides off.

#3) Mix one part water to two parts rubbing alcohol. Apply to the window. Ice slides or peels off.

Recipes (Click on recipes in the upper right corner for more!)

2 eggs-beat until thick (about 5 minutes)

Pour into skillet on top of brown sugar/pineapple butter mixture

Let cool slightly and flip (I find it works better if the husband flips--its heavy!!!)

I'm an American and Proud of it. I still say "One Nation Under God". I believe in our Constitution and am thankful for the men and women who have fought for it, and those who gave their life for it.

“Fill your house with stacks of books, in all the crannies and all the nooks.”
― Dr. Seuss